Good news is becoming hard to come by for whales. They are becoming scarce and harder to find, much like the krill whose population are declining as a byproduct of climate change impacts. Warmer ocean temperatures and the melting sea ice is affect the ecology of the Arctic and Antarctic breeding grounds and altering migration patterns.

Here’s a report by WWF on how climate change is affecting marine life including whales. 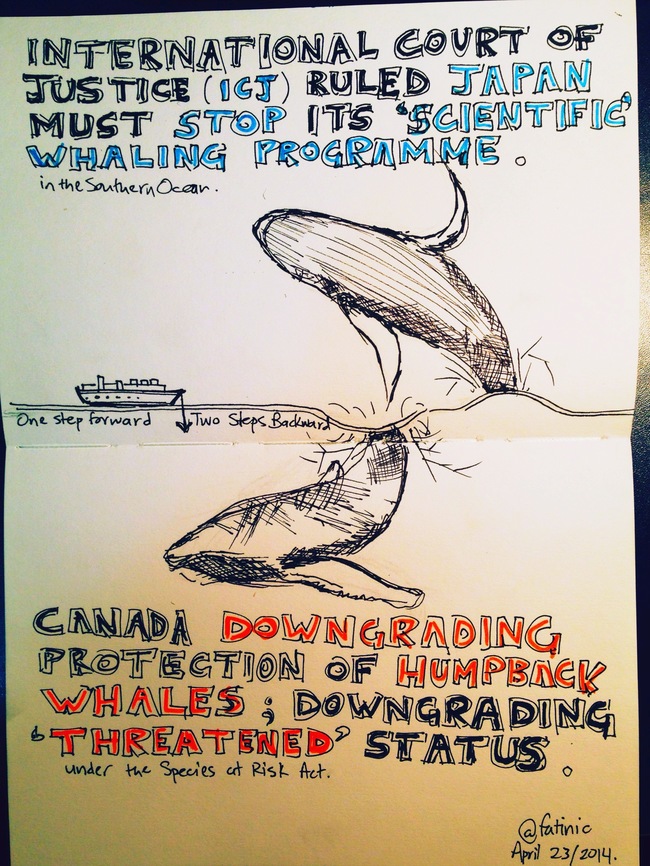 Canada has recently downgraded the protection of humpback whales under the Species as Risk Act. Found off the coast of BC, these whales are being categorized as “species of special concern” instead of “threatened”. The reason behind this decision is being attributed to 2011 recommendations by Committee on the Status of Endangered Wildlife in Canada (COSEWIC) and the observation that their population has increased “significantly” according to the Canadian government.

In a CBC radio interview, University of Toronto’s Andrea Olive reacted by saying that she’s not shocked but it’s disappointing.

“I actually see it … as a way to clear an obstacle for a project it’s only going to threaten.”

She went on to suggest that while the technical recommendations from COSEWIC are sound, they were made in 2011 and are now being heard only because it’s “politically opportune”. The political motivations derive from the Enbridge Northern Gateway Pipeline creating much debate in BC and this downgrade limits the obligations to protect the species’ habitats. Olive noted that basically it call comes down to the difference that “Yesterday the government was required to write a recovery strategy and implement it, and today it no longer is.”

Those fighting to keep the pipeline from being approved are concerned that this decision will elevate the level of risk for whales because the liability to protect them no longer falls under government jurisdiction, relative to the Species at Risk Act. Still, the whales will continue to be protected within the Gwaii Haanas National Marine Conservation Area Reserve spanning 3400 km. [Read the CBC article for more details.](http://www.cbc.ca/news/technology/humpback-whale-losing-threatened-status-amid-northern-gateway-concerns-1.2617633

Perhaps what frustrates me the most is that while we should be celebrating this news — their population is no longer near extinction — I am unable to find comfort in the news given the track record of the government and its systematic gutting of environmental regulations that undermine economic development.

Whales down under: ICJ rules to ban

In contrast, the International Court of Justice (ICJ) recently ordered Japan to stop its whaling programme in the Southern Ocean. ICJ found that while Japan claimed to take minke, fin, and humpback whales for scientific research, it was rather commercial. NGOs such as WWF and Greenpeace supported this decision. It’s also relevant to know that commercial whaling has been banned since 1986 by the International Whaling Commission (IWC). Read the National Geographic article for more details.

Australia’s motion to ICJ stipulated various concerns which weren’t sufficiently addressed by Japan leading to the ruling in support of the ban. However, it seems Japan has just announced that it will redesign its whaling programme to resolve those objections in order to resume its annual hunt in 2015. The New York Times article ends with researcher Masayuki Komatsu stating,

The ruling makes it clear that whaling can be legal if it’s actually carried out for research purposes. Japan is being forced to restructure its whaling from the ground up to turn it into a real research program.

I modified my graphic a little bit 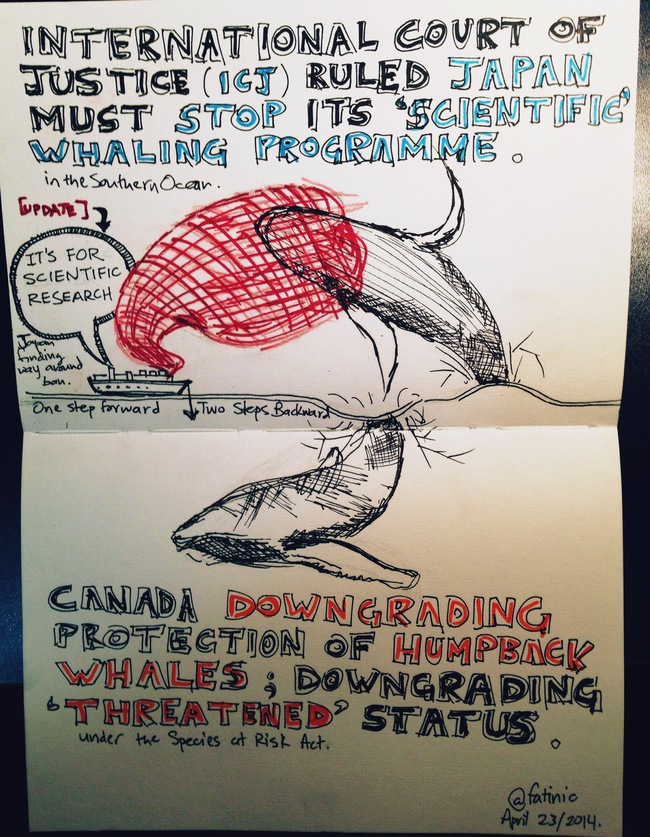 Aside from the fact that both these stories are about whales, an interesting observation can be made about the role of science. On the one hand, it seems science when convenient can mobilize political forces quite fast. Alternatively, the call for science can also be manipulated to obfuscate laws and carry out harmful activities. Ultimately, it is necessary to protect these marine species at a time when our oceans are at risk. While we seem to relish the rare sightings of these majestic mammals from the comfort of expedition boats, we should extend our empathy and think about the consequences of our shortsighted actions.

[Update April 27]: Japan is set to proceed with some of its whaling activities despite ruling. Confirmed by CNN

I am currently a finalist for UNEP World Environment Day vlogging competition. Final round is based on social media so each view and share counts. It would be great if you took a look at my video here snip.ly/BGN and shared it using the hashtag #WED2014 on facebook/twitter etc.