Raise your voice, not the sea level

I took to the streets and halls of my UWaterloo campus for this video blog to find people who would take a stand with me for the WED2014 theme this year.

The premise was simple enough: “look at the camera and say the theme for this year’s World Environment Day out loud”

“Raise your voice, not the sea level !”

It might be just be me, but it was simply interesting to hear each person say the same phrase in different intonations, pauses, and decibels. In asking strangers and friends to join this project, perhaps the most important realization I had is how valuable individual conversations are. Too often we are focused on marketing packaged information to the masses that we neglect to actually have one-one-one chats with each other. Of course, I didn’t get to engage in deep conversations about #WED2014 with each of the 32 participants, but it’s a start. A starting point to raise profiles of #WED2014 activities to these 32 people who can then share what they learn with their own networks. From a high school student to a spoken word poet to the Associate Director of the UWaterloo Interdisciplinary Centre on Climate Change, I was able to chat with a wide range of voices within a matter of a few hours. As you, the viewer, see these individuals taking a stand, I want you to be motivated to reflect and learn about the issues at hand.

We can build on this 2 minute video.

Why am I doing this ?

Simply put, I want to build and share stories through visual mediums that put the light on the front line communities being adversely and disproportionately impacted by climate change. Small Island Developing States (SIDS) belong to this vulnerable faction at risk of becoming climate refugees within this century.

That’s why 2014 has also been designated as the International Year of the SIDS as a means to push climate negotiations and action forward. If you are following the UN climate negotiations somewhat or have heard about in passing, feelings of frustration, anger, and lack of progress are pervasive (and rightfully so). But it’s important to know, with the latest IPCC report confirming what’s been known for quite some time, these high level treaties and global cooperation are necessary in the coming years. It’s one component of the necessary steps towards mitigating and adapting to the impacts of climate change collectively. Upcoming milestones including COP20 in Peru will provide foresight in what to expect in the 2015 climate treaty and without adamant pressure on our government leaders, we can be looking at another Copenhagen-Take-2 (as Earth In Brackets put it bluntly).

This video is my submission for the WED2014 video blogging contest which will enable me to report on the day and events if chosen as the winner (based on views and social media outreach). 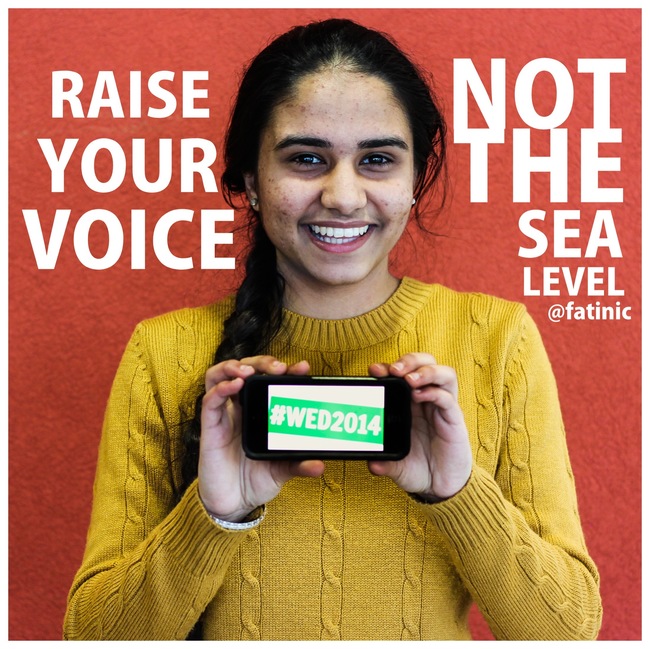 The video is intended to collect all the voices in support for strong climate action. I decided not to delve into the statistics on the intense effects of sea level rise and climate change. Partly, because I find myself often not registering the gravity of these numbers when seeing it only momentarily. In a 2 minute time limit, I wanted you, the viewer, to become curious and take control of your own learning. And also in part because I think in an effort to humanize climate change, we need to hear each other’s voices drowning out any sort of climate denial that still might exist today. Additionally, the facts are all clear and out there. It’s now not a matter of ‘if’ climate change is real but rather ‘how’ are we going to act and ‘how soon’.

You can never go wrong with the ukulele

Interesting lesson from my first crack at a video of this sort: any ukulele based melody makes for a upbeat happy tune.

I want to acknowledge that the impacts of climate change are anything but happy and very much devastating to those affected.

The decision to go for a celebratory tone was motivated by the assumption that we need to find optimism and drive to change the realities of our circumstances. Therein lies a tremendous level of joy and power in collectively joining forces to solve these challenging problems.

I would love to take another shot at this video using voices from local communities I record and interview at #WED2014. 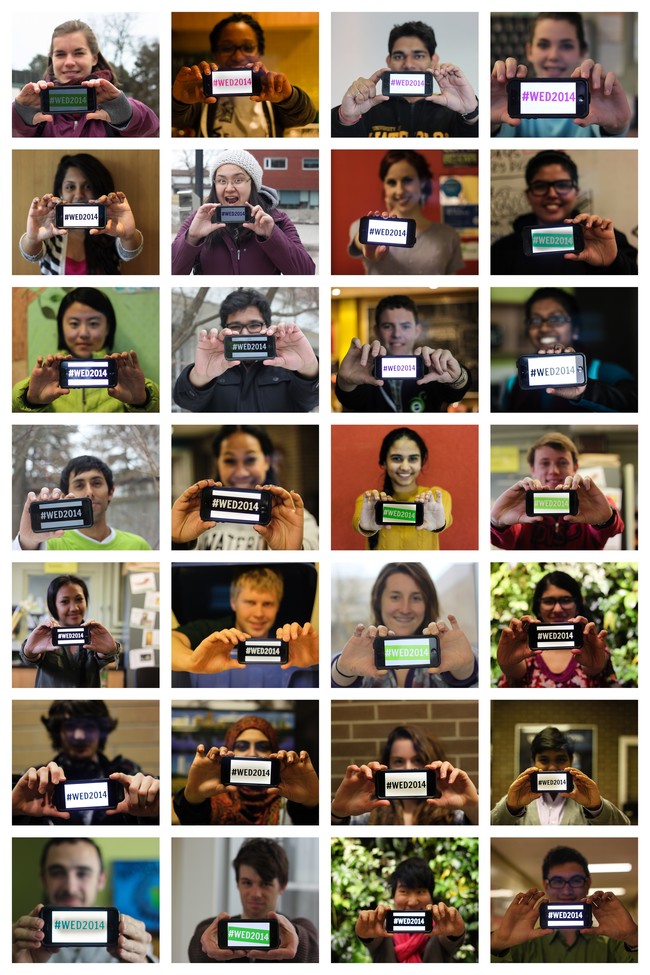 I hope that in watching the video, you will be directed to some self-learning about SIDS, climate change, and reflect on what you need to do to become an active change agent in the climate justice movement.

It’s worthwhile to point out that this isn’t really a campaign for simply World Environment Day. For those confused about the difference between WED and Earth Day, you are not the only one. While Earth Day started on April 22, 1970, WED has been a more recent initiative by the UN to push for environmental action. The site describes it as a means to “galvanize individual actions into a collective power.” But I hope it’s clear that these selective days aren’t the only days when we should take “positive environmental actions.” I think most people get that.

I am most excited to have the opportunity to report on the event and collect stories from SIDS communities and those engaging in climate action.

And remember, the theme tells us to raise our voices. We have personal control over the decibels of our own voice, but the only way to mitigate the sea level rise is to take substantive and rapid action to curb global carbon emissions. Such action needs to be driven through our collective voice, which I continue to believe is getting louder and louder. You can interpret that voice to literally shouting at the top of your lungs or figuring out what unique role you can play in your circumstances. Showing solidarity is the first step. We need actors and stakeholders at all levels to push for change.

This video was conceived, filmed, and edited within 36 hours. So, I wanted to extend thanks to all those who participated and I will, at the least, name them here:

Check out their profiles!

Also, thanks to Zaria Forman for allowing me to use her work in the video. Believe it or not, the graphics below are paintings even though you might be fooled by how realistic they look! Be sure to check out her work here. 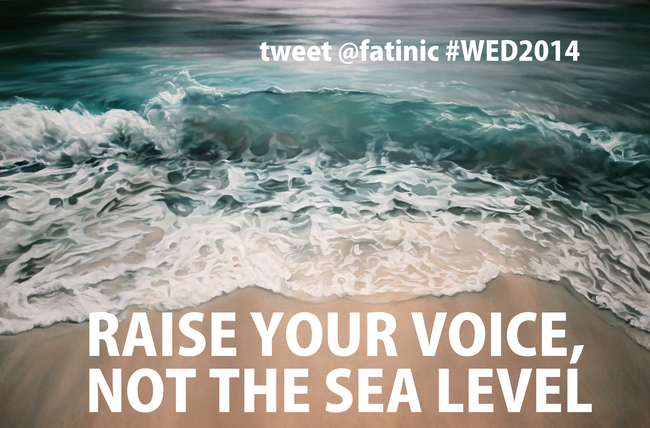 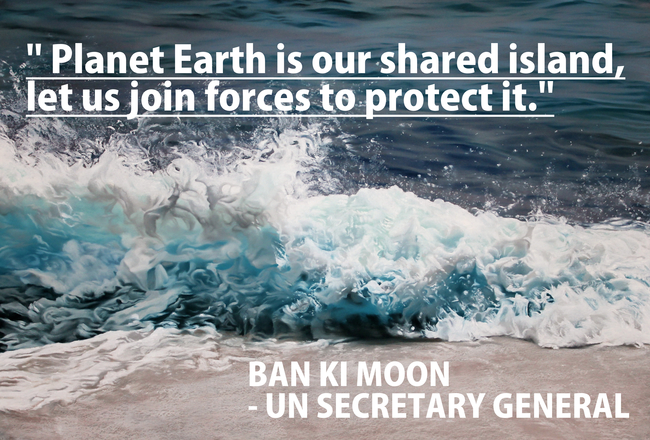 You can read more about International Year of SIDS in a blogpost I wrote here.

PS. if you noticed certain grammatical errors in the video, I share your pain also; was rushed to upload and noticed it after. An updated version will be up sometime in the near future once outcomes of the contest are provided.

As a last note, once the video gets to 500 views - I will share the blooper reel from the footage (and trust me, you don’t want to miss it!)

A possible message to simply copy and paste on twitter/facebook/etc :

Thanks for the support. Feel free to share how I can develop this project and profile stories that need to get attention. I am all ears.

Good news is becoming hard to come by for whales. They are becoming scarce and harder to find, much like the krill whose population are declining as a byproduct of climate change impacts. Warmer ocean temperatures and the melting sea ice... Continue →